Dallas airport.  Departure.  Madison to Dallas.  Easy flight.  Easy day actually.  Errands and small closing ups.  Yesterday’s packing left little difficult to do.  Julia had a problem when the bead kit she wanted to bring just didn’t fit anywhere.  Lots of reasons why it was a bad idea to bring a bead kit on vacation—the least of which is that she probably will not have time to touch it, but I was willing to entertain the request if I could get it in.  We are going to winter which while not harsh demands a few more warm things.  At first I wondered why the Alaska packing had space to spare but then I remembered we borrowed a larger bag. It worked for the cruise because we were not carrying bags around.  This trip we are carrying.  Rolling really.  The rolling bags and back packs are packed tighter than I prefer and  no beads.  Julia got stuck on this great deprivation (in her eyes) for a long time.  Australia was going to be awful and boring. She does know how to taunt me.  I am grateful that a late afternoon hard rain that we had to run through to reach the car washed the preseveration away.  A short run, we were drenched to the bone, enough complaining about such wetness to bring on giggles.

Julia wanted food in Dallas.  Eating today after breakfast has been spotty.  Avocado toast this morning, a fav in our house this season, but nothing but pretzels afterwards. Julia notices a noodle bar close to our gate and we nibbled summer rolls and peanut slaw.  I had a beer.  Blue Moon with an orange.  I rarely drink anything other than water before or during flights but I needed mellowing.  And it tasted good.  And I am on vacation. 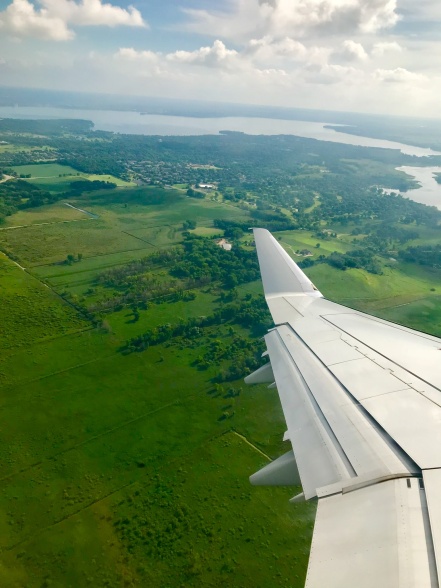 Madison from the air.

I rarely think that I live for these yearly excursions.  I do.  At least, I believe I do right now.  Sitting in a bar, with a beer and an iPad. Julia doing her most difficult dot-to-dot. We are taking off on Wednesday evening, landing Friday morning.  17+ hours and skipping a day.  We get the day back on our return.  We leave a bit after noon and arrive in Madison before supper the same day. Like the uncle who conjures quarter from behind your ears.  Magic!

Ah, delay!  Announcement that it will be a “fast” flight to Sydney—16 instead of 17 hours— but we can’t get there early due to an airport curfew so we are leaving late.  Just an hour and boarding is put off by much less. Very glad I fed the kid.  And the beer has done its work. What’s an hour!  I’m on vacation.

I have not been on such a big plane since we went to China.  They given us center seats and we have all four of them to ourselves.  I prepared for this ride with plane pillows and Benadryl, much more preparation than I usually do, yet if we don’t need either, yippee!

Boarding the flight from Madison to Dallas, I had the strangest feeling.  For a moment or more, I did not really believe we were going to Australia.  It was a quick gut impulse.  I plan traveling carefully and for a long time and yet, for some moments the journey was not real.  Whatever of that felling lingered as we disembarked in Dallas was swept away by a blast of Texas heat.  98(37) outside and steamy leaving the plane.  Yes, we are somewhere else going to the other side of the world.

One thought on “leave taking”