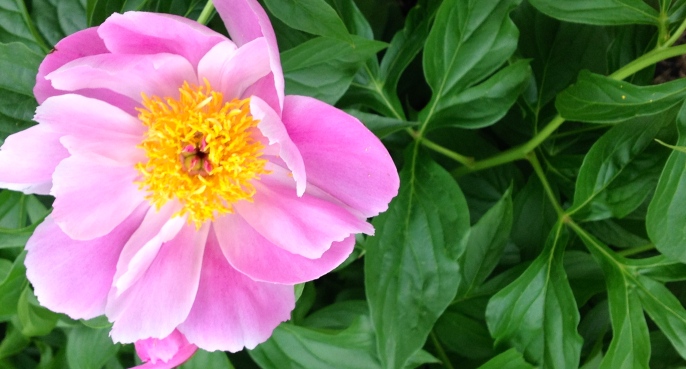 I wrote an entry — a very long kvetch about all of my very first world problems.  I did not publish it right away because I ran out of steam before it was completely finished.  I expected to do it the next day but I just did have the heart.  By the end of the week, every one of my problems, save changing all my dead light bulbs, was corrected and in addition to acknowledging just how inconsequential my concerns are/were, gratitude had crept in with bells and whistles.  No, nothing is perfection but sometimes there are blessings even in the challenges.

For the months of our cold winter and chilly spring, I’ve been writing and thinking even more than I’ve written it, that if only I could get outside in the dirt and the world would turn green, I would be happier.  Those ‘if only’ wishes rare hold true but here is one that does.

I was ready to dub this my favorite gardening time of the season.  Peonies — four varieties out right this minute — Japanese iris, perennial geranium and another purple whose name I can’t recall.  The intensity of the blues and pinks feed me.  But I feel the same way when the daffodils are out and later on in the summer when the hollyhocks bloom.  I don’t understand not loving a garden.  At least, not for the way that I am made.

Yesterday, I went on the last field trip of elementary school.  We went up to Devil’s Lake — the entire Randall fifth grade, a bit more than 100 kids.  Our kids filled two buses and we saw another 8 or 10 buses up there.  Lots of chaperones to allow for many activity groups.  Lots of kids wanting to spend time together.  I was with a group of 8 girls with two other moms.  The girls decided to hike — half was an easy walk along one side of the lake and the other half was not difficult but a tiring path along higher rocky slopes.  By the end of the day, I was so exhausted that my usual 20 minute nap did nothing to relieve my tired body.  Really brought home the fact that I am in awful shape — as if my carting mulch for the garden has not pointed that out.

Julia did pretty well.  She did really well.  Three years ago, she would not have made it along the easy walk along the lake and would not have had any interest in staying with her group for most of the day. Two years ago, the up and down of the rocky path would have defeated her.  She did do a little complaining and sometimes she was at the back of the pack, but generally she kept up, she was by no means the worst complainer of our group and sometimes she was out in front.  When the hike was over, Julia did not complain at all.  Something she would have done even a year ago.  She was tired like everyone else and afterwards she sat at a picnic table and read as most of her group played a sort of tag football.  Most of the girls from this group were very nice to Julia, keeping her in line, soliciting her opinions and dealing with her outbursts.

First thing this morning she began closing her ears and letting her worst impulses take over.  Where typical early teenage independence and spectrum behavior meet is a hard call and, it goes without saying, that I am not looking to squelch every bit of her spirit.  Still, when I asked her to set the table for breakfast, she took out a spoon and dipped it into the honey jar for a big spoonful.  I don’t want her eating from the honey jar.  Before attempting to set the table she managed two other diversions and, I admit it!, I was ready to blow!

I remembered the seminar from a few weekends ago — Julia was making ME feel badly and it was going to be her job to make me feel better.  There were clothes in my room that needed to be folded and put away and a load in the dryer that was finished.  She had to haul it upstairs and fold all of the clothes and put everything away before breakfast.  She complained a bit, I did not relent.  Then she did it.  And it didn’t take forever — she was hungry.  It wasn’t a perfect job but she got our clothes separated — they were mostly hers — and my socks in my sock drawer.

She had clinic in the afternoon and on our ride over, she started telling me a dinosaur story in her very muddled and without narrative flow way.  I walked her through getting a narrative with an introduction — Mom, I’ve made up a dinosaur story. — characters — of which she was one as a person who could cure a dino with a virus — a problem — the very sick dino — and a solution — pills that she made the dino take.  We ended with a feeling — I felt good — why — because I like making a dinosaur feel better.  This is not complex imbedded story telling but an extension of what she’s done in speech and what we’ve done all year in her weekly paragraph.  It is hard for me to see her progress in this right now, but I am pretty sure I could not have even walked her through a narrative form a while ago — at least not when it was just talking.  Perhaps she was doing it to humor me — so she didn’t have to put away any more clothes.

Later, we did a conversation about me.  What my plans were for her clinic time.  She is sooo not interested — Not because it is me but because she doesn’t recognize that kind of interest as something that will do anything for her.  This interest behavior is very Asperger-like.  I walked her through the interchanges — feeding her questions to ask me and then answering her.  At two points, she generated her own questions which was great.