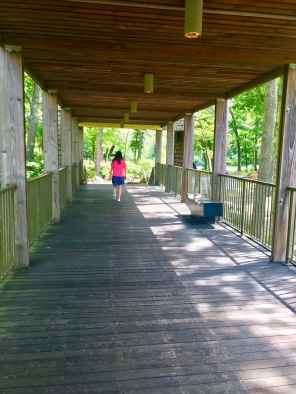 Last week, Julia’s inclusion facilitator (a post previously called “case manager” and hereafter IF) told me that Julia was not put on the bus list in error and if it was possible for me to drive her for the week, she would get the bus this second week of school.  I agreed, jotting down the bus as a topic of conversation for our meeting this week.  Sunday evening, the bus service called me to tell me when Julia would be picked up on Monday.  This morning the bus was early and so tooted its horn for us.  I went to the door and Julia was out a few minutes later.  I talked to the driver who actually seemed to know the the time quoted to me was too late and that they were still making adjustments.  She apologized that I did not get phone call before this morning about changes.  I feel like I’m living in some utopian bizarro world!  In Madison (I’m not going to repeat the bus saga, the sped bus never tooted its horns if Julia was not waiting for it.  A bus pulled up to our house, waited a few minutes and then left.  There were a few times when I complained the bus never showed up and the dispatcher said that the bus was there, waited and left.  If the bus was early, especially in the early days of ninth grade, it could have escaped our notice.  So, this little curtesy, a tooting of the horn seems like a miracle to me.

And I am thankful.

I had a full and wonderful day yesterday.  It was the first time that I could see some hint of possibilities for my life here.

First thing in the morning I spoke with the Managing Director of the Berklee Institute for Arts Education and Special Needs, at Berklee College of Music.  I had completed an application for Julia to study cello with them this fall.  Dr. Rhoda Bernard, Ed.D., was brusk and to the point.  Right now, their only cello teacher is fully booked.  She knows of one other person who she is querying but she could not promise that Julia could participate this fall.  She will be on the waiting list for the spring and Dr. Bernard was confident Julia could participate then.  I’ve read the online information and the application was extensive, so my only question was about the fit of the teacher, since finding a music teacher for Julia was quite the challenge before we found Martha Vallon.  Dr. Bernard almost seemed to take offense at my question and explained that Berklee has the only graduate degree in music and special needs and that a good fit was her job. I threw up my hands, quite virtually, and told her I trusted her to do her job.  It was an intense 9-minute conversation.  Dr. Bernard reminded me of myself when I am on a mission.  I wonder if I come across as brusk and pointed as she did.

I went to the Elder Sangha at the Cambridge Insight Meditation Center. Mare Chapman, my Madison teacher recommended the Center.  It is around the corner from Inman Square and very close to the first place that David and I lived in Cambridge.  I could not recognize the building we lived in.  All I remember is that it was rather ratty and most of Inman Street now looks pretty posh; however, the street is still narrow and parking was still impossible.

Cambridge Insight is housed in a big victorian that has been converted for their use.  The moment I went in, I felt the peace of years of mindful activity permeating the walls.  For a long time, meditating in a group has felt different from meditating alone. The difference is usually subtle and I take it for granted. Yesterday, I was struck giddy, recognizing the gentleness of the air around me as I entered. I was late—I’m still not giving myself enough time to get to and find places—and welcomed, as if they knew the path over that threshold has been long. The teacher was Olivia Ames Hoblitzelle.  I have read portions of her book, Aging with Wisdom, and quoted some of her writings in workshops.  It was a large group.  We sat, walked, listened to a lesson, broke into small groups and took turns speaking and then closed the time with a short sit.  I left happy, wondering over the possibility of community here.

One of the members of my small speaking group told us about what she was doing with the Harvard Institute of Learning in Retirement which sounded like something I might be interested in. I googled it last night and indeed the courses offered are interesting and challenging.  There is an application that needs to be filled out by the end of October to be accepted into the Spring term.  I have been yearning to dive into study and expand my universe for a long time but with a full plate in Madison I never even investigated the possibilities.  Yesterday, the possibility jumped right into my lap.  Now, I hope the rejection rate is low.

I had a quick lunch with Cheshire. Always the most pleasurable reminder of the why of this new life.

Julia came home with an assignment to write a personal essay based on the ideas of transcendentalism. We worked on the Thoreau excerpts last weekend and I tried to explain the deliberate living that he explained.  Julia is not a budding philosopher and layered thought is not easy. As we worked though the reading, I offered explanations from her own life, some of which helped explain and some of which was merely a distraction for her.  Yesterday’s writing was equally challenging.  Her teacher had given her a graphic organizer and in study hall, she attempted to fill it out.  As a writer she is the bowler who scores a strike when her ball jumps the lane she is bowling in. Her ideas, though not wrong, do not really respond to the writing prompts.  She tried and she works hard but her understanding is limited.  And transcendentalism is not an obvious philosophy.  We worked on the prompts for the introduction and first paragraph. I am not sure how to develop more of this essay with her and I hope that there is some further direction for her from her English class or study hall.

Last night, I went to am open board meeting of the Newton Special Education Parent Advisory Council (Newton SEPAC) which is an all-volunteer group of parents of children with disabilities in Newton. Massachusetts law mandates that each school district have a SEPAC and that the group provide feedback to the School Committee and school district on special education programs and policies, and participate in their planning and development. Newton’s SEPAC is an active group with passionate members. For the second time in a day, I felt like I had landed in an upside-down version of the world I left. At least twice in Madison, I was unsuccessful in forming or contributing to the formation of this sort of group in Madison.  I am so sorry that I couldn’t make that work.  I was not the leader who could do it.  Being among those parents last night, and by no means is everything sped in Newton perfect, I felt that I might be able to give what I can do here and now.

Julia stayed at home alone during the SEPAC meeting for 2.5 hours.  The meeting place was 4 minutes away from home and we texted numerous times.  She did the drawing and cello practice that I assigned to her, and then watched tv.

I went to bed more content and hopeful than I have in months. The moon was almost full.