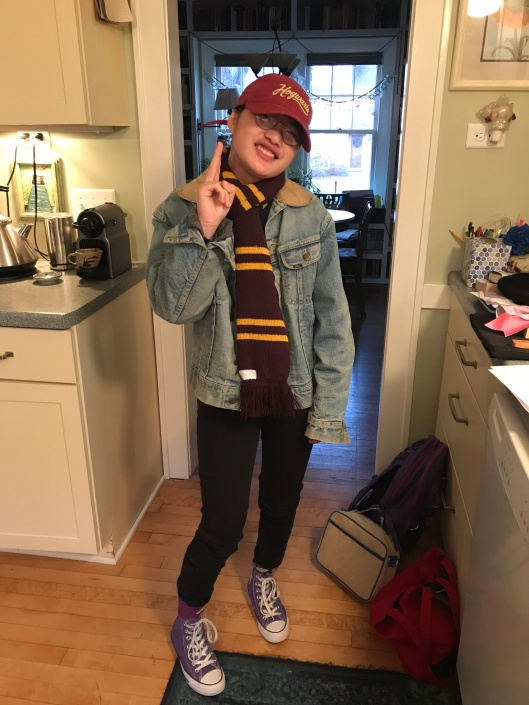 Yesterday’s solstice. The days are gray, almost dark enough to need lights in the house all day.  By 3:45, artificial light is mandatory and by 4:30 the sun set.  I put on out window, porch and tree lights for the night and left them on until the morning. I want to be part of the calling in the light.

Last night, Julia and a celebrated the winter break with a silly show: a Star Wars Panto ar the Bartell Theater.  In a grand British tradition of holiday pantomimes, it is a silly send up of a known story, this time six movies worth. Many character are cross cast including a guy doing Dame Darth Vader with black helmet and cape and a rather large purple corset.  Luke was a very small girl, Leila a very tall bearded dude.   The set looked like a 70’s basement with paneling and furniture turned into ship control rooms and pool noodles acting as light sabers.  We cheered the good guys, booed the villains and helped sing the chorus numbers. 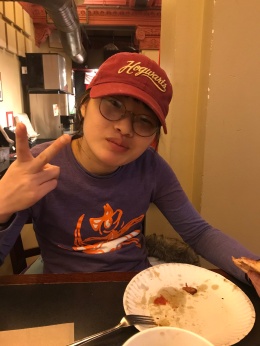 Julia had a rough week.  Impulsivity is on the rise.  She is quite taken with kids at school who dress up in cosplay gear with dyed hair and crazy makeup.  These kids are quirky and kind.  They have generally been sweet to Julia.  All that is fine but she didn’t want to go into has classrooms so to see one of them pass, or she went into their classes before class begins to talk to one of them.  She doesn’t want aides following her around and telling her what to do and she “cussed” (her word) out her math teacher on Thursday. The math class is anything other than pristine, Julia’s use of colorful language is still probably a pale copy of some of what is shouted out in class every day.  Doesn’t make it okay for Julia to do but she

The ice fishers are back on our bay.  I haven’t heard the radio announcement that the ice is safe for fishing but that doesn’t always seem necessary.  It isn’t bitter cold yet, so there are fishers without huts. They are a quiet community at least from a distance.  Last weekend it was quite the village but last weekend, there were still puddles, you know, water on top of the ice in places. I’ve seen this for years and for years I’ve grimaced and thought less of these people for taking chances—who in their right mind would wander about on watery ice?  I have a great fear of falling through ice. Not that it’s ever happened to me or anyone I know. I’ve never seen it happen but the images from movies are strong in my head—a multitude of Amy’s needing rescue from Lauri’s  and Jo’s. Last week, I wondered if those fishers knew the ice for so long and so well that they were not taking chances. I don’t hunger for the skill and intuition but I am curious to sit over cocoa somewhere safe and warm and talk about the Tao of the ice.

The airport this afternoon is not busy.  We were early just in case of craziness,  it met no traffic, no lines and little noise.  We are boarding for Boston soon and I expect to take the lovely post-preparation, pre-festivities nap.