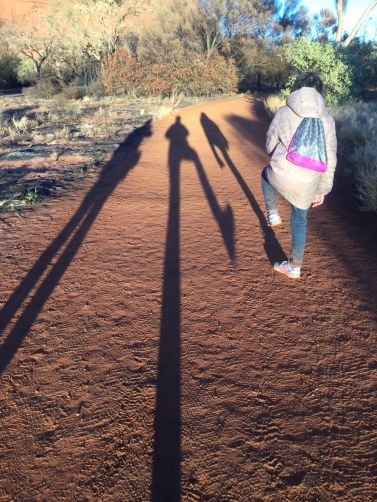 Around the base of Uluru there are natural caves which the aboriginal people have been using for thousands of years.  The caves provided shelter from harsh weather. They also provided a natural gathering place.  There were men’s caves and women’s caves and caves for all. They were places to teach, to tell stories and to celebrate.   The relatively smooth walls were excellent for painting. (We would see the ochre pits in two days time where many shades of ochre used to make the fat based paints could be harvested.) The caves paintings are only visible on the upper half of the walls because early tour guides attempted to enhance the colors of the paintings by splashing buckets of water on the walls. 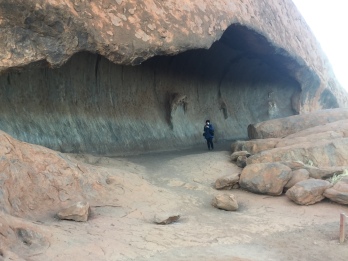 We were fortunate to have an aboriginal guide and very good translator.  One thing the people of the part of the country do often is to sit or squat on the ground, smooth out the red sand and draw maps and symbols as they explain something.  Our guide taught us about the symbols used in aboriginal art in the sand. The sign for a human is a u because that is the shape left when a person sitting crossed legged gets up.

What was particularly touching about this is that Julia’s fist drawing medium was sticks on sand.  When she first came home, she drew in sand and loose soil until she discovered paper, chalk boards and marker boards.  A year later when we visited the little girl who had been her crib and bed mate (After she had been adopted), the two of them ran off in a playground and drew in the sand. 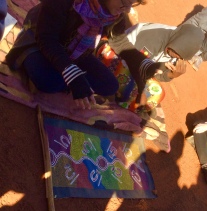 On an unfortunate note: earlier in the morning when we walked around the base of Uluru, we came upon the place where people climb the great rock. The aboriginal people have long asked people to stop the practice. The sign at the base of the climb says it all. 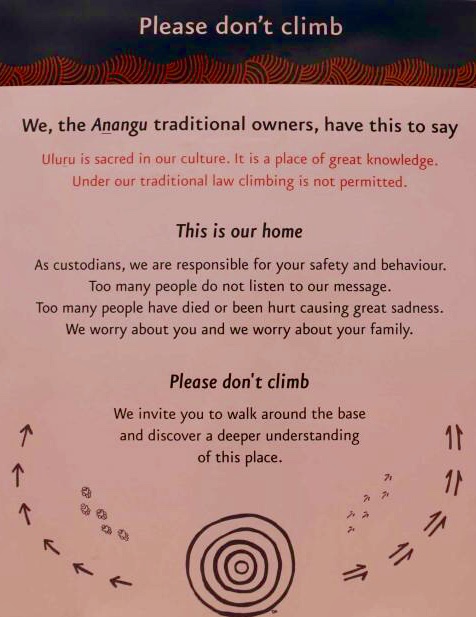 And so, I was surprised to see a long line of tourists, domestic and international queuing up for the climb.  I did not want to judge but I found it hard to see the climbers point of view. I was saddened by the lack of respect.  There are other rocks to climb.  Next year, in October, the climbing will stop by law.  On the day we were there,  a Japanese man expired during his climb and could not be revived. I wondered if there were any words that could have convinced him forego that part of his visit?

We went back to our camp for lunch before a long afternoon drive.  Just before we left the site, we walked a short distance away from our camp.  We had a view of both Uluru and Kata Tjuta and the bush in-between and all around.  Life is all around but not the life that I am used to seeing.  It was a first taste of the diversity of land and of life that Australia would offer us.

And then during our long drive, we came upon a lake of salt. 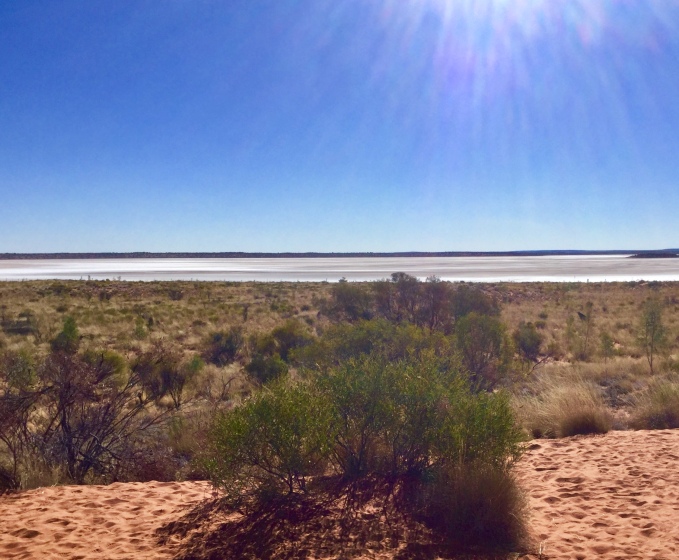 We arrived at our second camp in time to set up and have our evening meal. A highlight of the night was a great bonfire for which we all gathered fire wood earlier in the afternoon by the side of the road in the bush.  Julia was allowed to take wood from the pile and put it on the fire.  Our guide even produced marshmallows, which although smaller than their American cousins, were quite tasty when toasted. 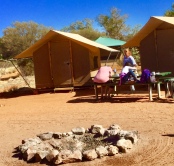 1 thought on “right after first light at Uluru”