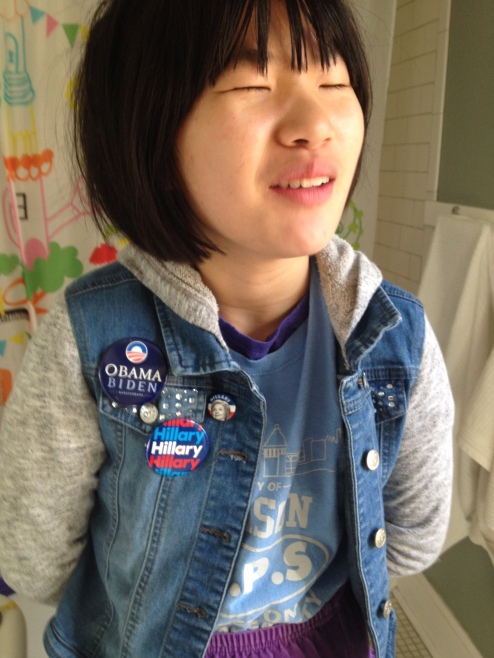 After watching the debates and talking about the election in school, Julia is very much into it.  She fished out an old Obama button from some treasure trove and is wearing it along with two new Hillary buttons.  Her assignment for Tuesday is to color a map as results come in.  She told me that she is going to color the whole thing blue before any results come in.  Magical thinking to be sure, but she’s got the right idea.

I think that the first time that Cheshire filled in a map was in ’92, Bill Clinton’s first win.  She was in second grade and had some of the same black and white notions as Julia does now at 15.  The big difference is that although I was willing and able to explain Bush’s appeal to conservative voters in ’92, Julia believes that Trump is mean and loud and “can’t calm himself down.”  She’s right and I see no reason to find something nice to say about him.  Maybe next election, a real republican will run and I’ll tell her about different points of view.

There have been small roving bands of fretful freaked out liberals in my neighborhood all weekend, gathered in agonies of hopelessness. Their dogs, who really have to go, wait patiently at their feet. Then I lumber up, the most tightly-wired person some of us know, and they look at me hoping I will say the exact right thing.

Yesterday in church, our minister read the entire entry.  I was grateful for the reference.  I have many of the same feelings.  I am fine, life is good, Julia is ok but there is an undercurrent of fear, agonies of hopelessness.  I am looking for someone to say the exact right thing.  What if?  What if?

I admit to the agonies but try not to wallow.  Whatever, we will not die on Tuesday.  And that’s something.

Hopefully, the overwhelming majority of polls are correct and Hillary will win and there will be a gentlemanly concession speech and no violence.  Am I as much into magical thinking as my daughter?

I was going to write “back to real life” but the lines of public and private are blurred these last pre-election days.  The election is as present as what’s for supper tonight which isn’t much because I feel a stomach thing coming on and all I want to do is feed Julia what is easy, wash the dishes and go to bed.

After a number of weeks with a much reduced therapy schedule (one hour speech, one hour social skills book club), Julia seems more than fine.  We spend more time at home after school and she finishes homework in time to draw, sew or play video games.  She may be happier.  I hope it is the right course for her.  According to teachers, she has not had a bad day in school the whole quarter which is a first for her.  Whether I am wasting this time by not packing it with therapy is a big question for me.

Last week, an opportunity for dance therapy came up.  We did the application and intake session months ago. I liked the people. The therapist thought that Julia would do well doing it with another child in a dyad.  I agreed.  It would be another social skills opportunity and the chance to work on spontaneity and free movement.  It is only recently that Julia spontaneously runs.  How nice to encourage more of that movement.  Last week, they offered to do individual therapy with her because there was no other child.  I considered it.  Funding was already approved and I am so interested to see what Julia will do.  Again, the question.  I try to silence my screaming lack of confidence.

A few weeks ago, a friend offered to teach Julia calligraphy.  Julia was enthusiastic and I have been dragging my feet to move on it.  Then, a few days ago, Julia woke up before I did and came into my room with a Chinese Brush Painting book.  She put it on my bed and told me that this was the kind of calligraphy she wanted to learn.  Fortunately, this friend is a student of Chinese brush painting and although she says she is a beginner, I’m sure she can start Julia off well.  We will begin with a Buddha board, drawing with water and watching the images fade.  We’ll see how my girl who lets go of nothing does drawing with water.

Yesterday, wE were are an art show put on by a group called Artworking whose mission is to

provide[s] career-oriented support for artists with cognitive disabilities. Artworking serves artists in a professional studio workspace as well as in community and private settings such as an artist’s personal studio space or at public events, workshops, sales opportunities etc. . . . Artworking actively seeks opportunities for our artists and business owners to compete with their non-disabled peers in local and regional markets while fully participating in the mainstream art and business communities.

I looked at work as Julia found the interactive table and started drawing.  I spoke to one of the artists who is working at Artworking.  His work is large with a kind of magical Christian overtone. A painting that he described as a crucifixion had a huge person of Christ in the middle with very small crosses around the edges and angel heads on the bottom.  From the Christ’s hands and eye, the artist painted tiny drops of blood which reminded me so much of paintings we’ve seen in Italy. I tried to describe how in some paintings there were angels catching the drips of blood.  I have no idea where this custom originated but it is painted over and over.  He nodded at my description and I wished that I could show him the work.  And the importance of simply seeing struck me hard.  I have no idea if and when Julia can use what she has seen and will see.  These days she is drawing Sonic and Blaze, cartoon characters, and it is hard to see any connection with what she saw during the summer, but I trust the possibility is there.  For all that I am not sure of, the possibility of exposing her to art in all its forms feels absolutely dead on right.