On Mondays, much of Milan closes– museums and stores and restaurants and gelato bars  (not all of course or we would all starve to death)– but the churches (all but one on my list) are gloriously open.  I thought I’d sprinkle churches thought our days but it didn’t work out that way and so, Monday became the tour of churches.

The variety is amazing.  These are all Roman Catholic Churches and all of them are old.  Yeah, but in Italy old doesn’t mean two or three hundred years.  Old is a thousand years or eight hundred or a mere three hundred.  And some of the churches were built after knocking down still older churches and a few, and to me a significant few, were built over pagan cemeteries.  All that makes me wonder about holy ground.  Are pieces of earth inherently sacred and people are drawn to them to celebrate the sacred?  Or do we make ground sacred by the act of concentrating it?  And once concentrated, does the holiness stay no matter manner of deity is worshiped there?

We didn’t do organized tours or audio tours or even carry around information about each place we visited.  We just took in the shape and decoration.  Looked up at ceilings and domes and down at floors.  Stared into nitches  and alcoves.  I wanted Julia to see similarities and differences.  I pointed out Jesuses and his family and friends.  And where people sat to worship.  I did not try to find examples of other religions, Roman Catholosism in Italy, even just in Milan provides plenty of diversity.

The Duomo of Milan:  a place hard to believe is real.  One of the biggest churches in Europe.  If it was just a little taller, I imagined that the columns would disappear into the mists of the heavens.  It took 400 years to build which is easy to believe and now, they are looking to raise funds to restore the duomo.  The “adopt a spire” poster had a catchy ring to it.

Basilica di Sant’Ambrogio: One of the most ancient churches in Milan.  It was actually built by St. Ambrose in 379–386, on ground where martyrs of the Roman persecutions had been buried.  Inside the church there are glass and gold coffins of St. Ambrose and two of his siblings.  I think his sister was also sainted. The coffins are built into altars in the church nitches. Some are full sized  and a dressed skeleton is laid out in it.  Others are smaller and contain wrapped bundles, presumably of bones. 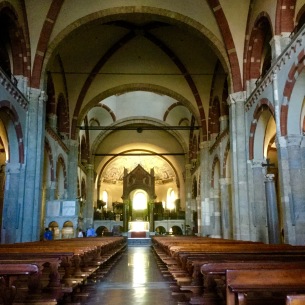 Basilica of San Lorenzo Maggiore:  Originally, it was built in Roman times and then rebuilt several times over the centuries. The present building was constructed in 400 or so but was hit with lots of disasters, including fire, earthquake and a collapsed dome in 1500.  This was my favorite church of the day–simple, almost round, lots of good dancing space.  Between the dome and the floor was a walk way around the whole church that used as a women’s gallery. 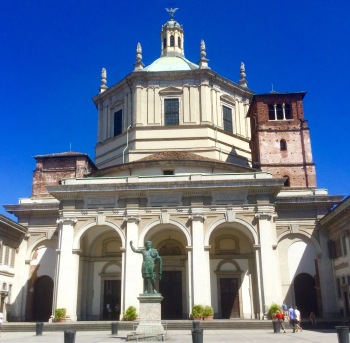 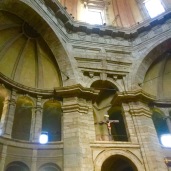 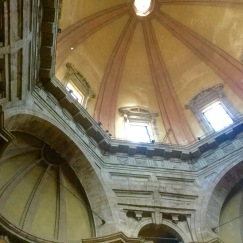 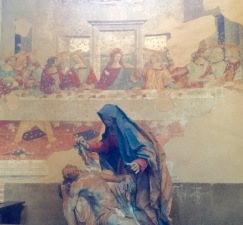 Basilica of Sant’Eustorgio:  Basilica of San Lorenzo Maggiore is on one end of a part and Sant’Eustorgio is at the other end.  There was a neighborhood between the churches that was destroyed during WWII and there was a decision not to rebuild.  Sant’Eustorgio was an important stop for pilgrims on their journey to Rome or to the Holy Land, because contained the tomb of the Three Magi or Three Kings.  According to legend, Eustorgius I, the bishop of Milan took the relics of the Magi to Milan from Constantinople in 344.  Then in the 12th century, Milan was sacked by Frederick Barbarossa and the relics of the Magi were taken to Cologne.  In 1903, fragments of bones and garments were sent back to Sant’Eustorgio’s. 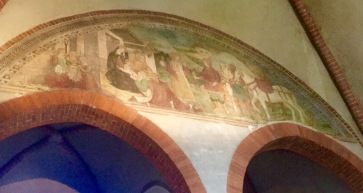 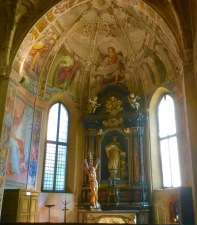 In so many churches, it is hard to imagine what they were really meant to look like.  Restoration shows that many walls  and ceilings were covered with fresco.  The plain wall with a frescoes ceiling may not have existed.  And I enjoy that so much.  It also is not clear how much more could be restored.  On some walls, only small patches of walls have had newer layers of plaster taken off.  And then there is the question of restoring to what period.  There is a partially visible fresco beneath a fresco on many walls and columns.

The Last Supper is house in the refectory connected to the church.   The church was constructed in the late 1400’s although there was a prior chapel dedicated to the Marian devotion of St Mary of the Graces.  Duke Ludovico Sforza decided to have the church serve as the Sforza family burial site and it was never bad to be supported by the Sforzas who crest has the snake with a human in its mouth.  the church is very, very quiet considering the hubbub outside. 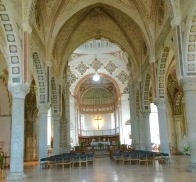 On one hand, a day later the churches are melting into one another.  On the other, I feel their individual spirits.

Between churches, we had lunch in a non-tourist restaurant.  When we went in, it was filling with guys in orange pants –road crews.  Later, two very delicate ladies came in and later still a few kids with their mother.  The food was cheap and really decent and it felt like we had crossed over into a real city.  However, a few blocks later, we were back in our tourist world.

1 thought on “Milan – the churches”